Your donations will help support further pioneering research at King’s.

The King’s Liver Molecular Genetics group, led by Dr Richard Thompson, undertakes groundbreaking research into genetic causes of liver disease in children. Through the identification of new gene defects involved in liver disease, diagnosis can be made earlier and treatment can be better targeted to the patient’s condition.

Two of the four main genetic defaults found to cause liver disease in children were discovered and described at King’s. This research has led to direct clinical benefits for children with these gene mutations. Using a patient’s blood sample, we can now simultaneously sequence seven different gene types to provide a genetic diagnosis within a matter of hours. As soon as a diagnosis has been made, doctors can start personalised treatments.

Working within the Institute of Liver Studies, the Liver Immunopathology Research Group is led by Professor Giorgina Mieli Vergani and Professor Diego Vergani. They are global leaders in the field and have been conducting research at King’s College Hospital for over thirty years. The group has trained over thirty Postgraduate Students and numerous Research Fellows as well as publishing over 500 peer-reviewed papers.

Professors Vergani and Mieli-Vergani are recognised worldwide for their work in autoimmune hepatitis. Extremely rare in children, autoimmune hepatitis is a condition in which the body’s immune system malfunctions and attacks the liver, causing inflammation. Continuing cell destruction results in scarring of the liver and can lead to cirrhosis (long-term liver damage).

Current research focusses on developing a new treatment for autoimmune hepatitis. Within the next few years, researchers hope to begin clinical trials, in which the deficient immune cells are removed from the patient, are re-educated in the test-tube and then are re-injected back into the patient to stop the autoimmune attack. Researchers believe this form of treatment could be particularly successful in children, who have a maturing immune system.

Recent breakthroughs in liver cell transplantation have produced an alternative to full organ transplantation in the management of liver-based metabolic conditions and acute liver failure. Researchers at King’s have pioneered a new technique to encapsulate liver cells in alginate microbeads, which can be transplanted into the abdomen cavity of a child.

There are numerous benefits to patients undergoing this treatment:

A World First in Children’s Liver Care at King’s

At just twelve-days-old, Iyaad, pictured here with his parents, went into liver failure after contracting a virus. Transplantation was not an option as he was too sick and no donor was available. 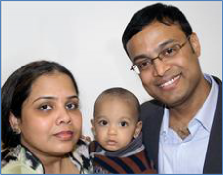 tologist and Clinical Director of Child Health at King’s, and his team injected donor liver cells into Iyaad’s abdomen that acted as a temporary liver, processing toxins and producing vital proteins. The cells were coated with a natural chemical found in algae so there was no risk of the cells being attacked by his immune system. Iyaad’s parents noticed a positive difference in his health within forty-eight hours and after two weeks his own liver had begun to recover.

This was the first time such a procedure had ever been performed and its success is testament to the expertise of Professor Dhawan and the team at King’s, who are constantly working on translating their findings into treatment improvements for our patients.

The paediatric bio bank at King’s is the largest of its kind in the world and is a vital resource to all researchers within the field of child health. Professor Mowat founded the bio bank in the 1970s and today it stores the most extensive collection of children’s liver samples in the world. Due to the high volume of patient referrals to the children’s liver service at King’s, the hospital is in a unique position to collect, prepare and store a wide variety of patient samples.

Over the past forty years, the bio bank has been a valuable resource for our researchers, underpinning all the major breakthroughs in understanding more about the origins of disease, improving methods of diagnosis and the development of new treatments. Given the pivotal role bio banks play in promoting scientific discovery, it is essential that we invest in the ongoing development and upkeep of the King’s paediatric bio bank.